A shortish post today–it’s Mother’s Day in these parts.

Mother’s Day in our family is spent doing things for and with the Boodle.  It has been that way since I became a mother, and I have no interest in changing the pattern.

I became a mom through the Boodle’s presence in my life.  What better way to celebrate that fact (especially given the fun we have together)?

The truth is that I have a problem with any commercialized holiday, and Mother’s Day and Valentine’s Day fall just under Christmas and Halloween for commercialization in my book.  And at least All Hallow’s Eve and the Winter Solstice have some real historical precedence.

I’m not saying we shouldn’t celebrate motherhood, or fatherhood, or parenthood in general.  Honoring those we love is never a bad thing.  Setting aside a special day where people buy cards, take mom out to dinner and tell her how much they appreciate her sounds great in theory too.

I favor the longer term approach though.  Instead of cards and remembrances on a special day–leave me a solitary flower on my pillow unexpectedly, bring me my tea in the morning with a smile, or just come over and hugs me daily.

Oh, yeah…  my husband does most of that anyway.  He doesn’t leave the flowers, but the Boodle brings dandelion bouquets all year.  The hubby comes in while I’m working and rubs my shoulders and tells me I’m beautiful regularly.

Who needs Mother’s Day when one has all that?

Then there are those who have no concept of a special day for mothers.  It’s not a worldwide phenomenon, but I was thinking a bit more local… as in our deck.

See, we have outdoor cats.  You may have read some of Shan Jeniah‘s posts about her semi-feral cats.  Well, because of the winter ick and life happening here, we missed our chance to get their sister, Punkin, spayed in time.

It was actually quite funny when I found that out yesterday.  Creamsicle met me on the stairs,  all love and mews and leading, as she tried to lure me over to the nest, a “Come–come see the grandkids!”  Even Grandpa Beauty has been a lot more civil lately.

Punkin wanted none of it.  All wild animal instincts triggered by new motherhood, she hissed and yowled from behind to try to draw our attention to her and away from her babies.  Thing is, the silly girl made her nest right in front of the sliding glass door on the deck…. 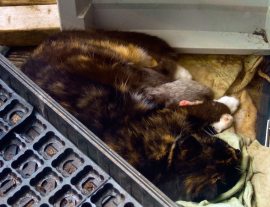 Just outside the window

We moms are pretty funny sometimes.

After all that great news the last few check-ins, I almost feel depressed by this Sunday’s.  Of course, I spent two days driving out to Syracuse to spent time with family.  My grandmother turned 90 on Thursday.  My grandfather is in a nursing home (not quite on death watch but we know all the time we have with him is borrowed).   And the same ick and steady series of small calamities that kept me from getting our cat fixed in time also kept us from making the trip out (especially the ick, as Grandpa is on antibiotic therapy).

After a time, phone calls and letters just aren’t enough.

I did bring my laptop; I did get some editing done and I wrote some journal entries.  I didn’t write any new fiction at all.

Along the drive, I took time to stop off and see some new places that we usually don’t have time for during these trips.  Instead of the highway for the whole drive, I took rt. 5 from Canajoharie to Utica, and grabbed pictures along the way.   On the way home, I detoured down toward Fayetteville and passed by my Great-aunt Pearl‘s former house.

I even gathered up the courage to knock on the door of the lady who owns it now and introduced myself.  We had a wonderful talk, and in the way patterns repeat, I can see how she’s becoming much like my great-aunt once was.  I wonder if her brother has a daughter too… 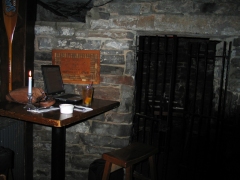 I also took some time to hike the trails at Chittenango Falls and had supper in the “Dungeon” of Beardslee Castle.  Not much writing time, but lots of fodder for the future…  And despite the sitting and driving, I made my ROW80 Fitness goals for the week.  😀

I almost wanted to be depressed by the lack of writing, but… as you can see, I can’t.  It was a good week.

I hope whatever your Sunday brings you, it is good.