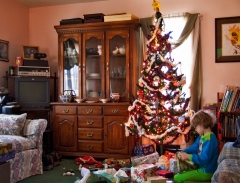 It’s Wednesday and a major holiday for most people, so it probably seems odd to post today.  I mean, how many people will post blogs today?  Especially WIPpets.

I’m posting.  I must.  I must post because I have a terrible tendency to forget to post if I miss a week.  Then I feel guilty, then I don’t want to post anything.  Then I…

Long story short, I need some consistency.  So, while I’m looking across our livingroom scattered as it is with the dregs of Christmas morning, decorated tree and Nutcracker on the video PC, let me give you something of a Christmas present.

Fantasia has always been on my short-list of beloved movies.  Clair de Lune has likewise been one of m favorite pieces of music.  When Disney first released Fantasia, several songs were dropped from production.  Some were even cut after filming.  Here is one of those pieces:

also…  please enjoy this amazing piece to make a White Christmas seem more real, even in areas like ours where the snow left two days ago:

Nothing really, save I turned 44 today.  Yep.  That’s me.  Double doubles…

I did give you 25 sentences to make up for the other weirdness.

“Fine thing to tell me now,” I growled, taking Chaz’s cigarettes off of the desk and snitching one. I fumbled a moment with my dead lighter before Chaz sighed and reached into his pocket for his. “Thanks.” I held it back out to him but didn’t release it when he reached out his hand. “Tell me something, Chaz.”

I let go of the lighter and moved away to grab a seat by the ashtray. “Is everyone here involved in this chicanery?”

A chuckle formed at his lips and was held back barely. “Chicanery. Where’d you learn a big word like that?”

Chaz had developed evasion into an artform. I was more certain of that than I’d ever been before. Still, I winced, regretting what I’d said. Given all that had happened since our arrival, it was mad to think Chaz would have just let those things happen. He had lost as much as I had, even more than I had. Two of his own children and one of his lovers were dead. Ellen and he had lost their sister. I managed an apologetic smile. “I saw it used on the vid.”

He just nodded. “And to think some people say the thing has no redeeming value whatsoever. Go, get those errands done. I want you taking a rest around Nooning.”

Well, that’s it for today.  Hope you enjoyed the ‘pet and had a lovely holiday if you celebrate.  Blessings of goodwill and the season go with you all.

(For more WIPpets, please check our linky here.  Thanks to K.L.Schwengel for handling all the admin and keeping the monkeys occupied.)