Why Would I Want… 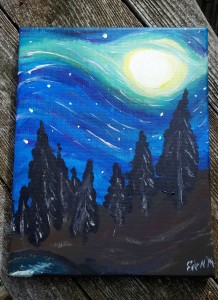 Remnants of a Paint & Sip

Another Wednesday… well, Thursday, but you know what I mean, hopefully.   I did plan out this post Tuesday, and if I’d been on the ball a bit more, it would have gone out yesterday the way I’d intended.

Oh, well…  at least it’s being posted now.  Still in time to get in a ROW80 check-in and post this to the WIPpet linky….

It’s also the last day of November, which means the last day of NaNoWriMo 2017.  I didn’t win, and that’s OK.  I didn’t go into this year’s challenge with a goal of 50K words for a new story.  My goal at the moment is to finish a 20K proposal for the Golden Heart Awards by Dec 9th.  I’m not really on track for that either, though… and I’m not as okay with that.

Fortunately, I can submit a rough draft into the contest, because a lot can happen in a month, and I’m not that far behind with that goal.  I’m not even that far behind in most of my goals. The ROW80 website probably could use a bit more love than I’ve bee giving it, but… except for a sponsor-post image courtesy of Shan Jeniah, and some more help with sponsor visits (Thanks, Beth, Kim, Alberta, Mike… and everyone), I’ve not had the backup with keeping things growing the way I’d hoped. We’re a great group, but…  well, I knew things would be rocky this Round, and guess what?  They were.

This isn’t to say I’m upset.  Things were rocky, but not insurmountable.  The unsteady progress of this Round of Words highlighted  one of the great things about our group.  Life happens, and we all know it and deal as best we can.   We don’t point fingers, we just move forward.  Because things may not have moved forward the way I’d hoped, but they did move forward.

So, for this upcoming week, my goal is my RWA entry and the maintenance on the ROW80 blog but little else.  I can do that.  🙂

Today’s WIPpet maths are on the weird side, mostly because I really wanted an excuse to post these six small paragraphs. 😉  So here we go…  This post was planned and  set up on the 28th, was supposed to be posted on the 29th, was tweaked and posted on the 30th: three days with two involving actual work…  2 x 3 =6

This excerpt comes out of my fanfiction, the Odds.  (Yep, I really rock these filenames, don’t I?)  In trying to capture some of Alanii and Atyr’s less romantic playful sides, I’ve put them together after a long estrangement into a sandbox with a “BBB” (Big Bad Boss) and another BBB (Big Bad Bureaucracy).  Somehow romance still seems to follow them though….  jut not in this snippet.

More sterile surroundings. Alanii considered the office, his brow rising uncomfortably. The room was teeming, and not all of the wilderness was paperwork.

He nearly sat on a small, brown house mouse that was munching away at the cushion of the chair Atyriia had directed him toward, a solid straw pad once in a long distant past.

“I see you don’t get much work done here, my lady.”

She was nonplussed by his dry tone. “Most of this concerns matters I’ve already dealt with. These are simply records. Paperwork and filing.”

“Ah.” He scanned the room again. “You need a computer in here then.” At her cocked brow, he hastened to explain. “To store these on.”

“So it will be neat and more organized?” She smiled. “Why would I ever want to do that?”

Enjoyed that?  Then why not head over to the WIPpet linky and visit some our other awesome members. A huge thank you to Emily, our gracious host. 😀