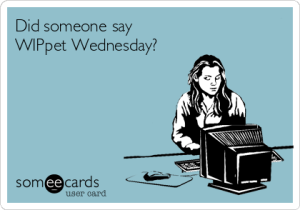 The check-in is the easy part.  I’ve been…  flumpy.  Mostly I’ve tried to finish off a stack of library books that I’d foolishly taken out (well, actually I’d ordered them through the intra-library loan months before and they’d all managed to arrive at the end of October…  and if I hadn’t signed them out, I’d have had to repeat the request process all over again).  I feel I should be writing, but I also feel I need to finish these books.  I feel…  unfocused and haven’t been able to concentrate on my “work writing”.   I’ve still got some time to work on my proposal for the Golden Heart awards, but lately, I feel like I’m slogging through Flag Fen or someplace similar.  Most any progress I’ve made in my J&tWW fanfic The Odds.

I managed some serious words there. Which leads to the…

I have nine paragraphs today… a bit longer than I’d planned but when I looked at the snippet, things pretty much fell together. This piece from The Odds (I posted from this fanfic last week, dealing with Atyr and Alanii), involving Kieri and Andy’s reunion.  This piece is pretty raw (edited mostly for spelling and really obvious errors but not much else).

Kieri looked at something on his arm guard “S__t.” He reached into a pocket. “Here. Nights can get a bit rough in the Laris.” The man passed him a small phase pistol with a sheath and an extra cap of charges.

Andy accepted it without question. Rough was one thing they both knew, and it didn’t look like Kieri had forgotten any of those lessons these past six years.

As he was busy threading the thin waist sash he’d been given by the Andar through the sheath, Andy felt a tenuous touch on his shoulder. He looked up, to meet Kieri’s green-eyed gaze, looking down at him.

Andy asked “what’s wrong?” even though he knew what it had to be.

The other man raised a finger, allowing himself to track it along Andy’s cheek. The tip trembled then paused just before his chin. In a whisper that was no steadier than his hand, Kieri said, “It’s really you. It’s you. The Bright Knows, I wished for this, prayed for this. Just to see you again. To see you—have a chance to tell you…”

Like so many times before Andy felt his breath catch; his blood ignited at the man’s touch. He reached and clutched his lover’s hand to his skin. He stared at that careworn face, admiring every line it held. “Tell me what, lover?” he breathed.

Then, like so many times before, the man stopped short. His expression hardened. He withdrew. “I’m glad you’re back. I missed you.”

Andy felt his breath leave him, worse than if the man had punched him. How he hated when he…when he did that. For a moment he just stared at Kieri—f__n Brat hadn’t changed much after all—and fumed. No, Andy decided. He wasn’t going to leave it alone this time. He’d been dead. Six years he’d been dead, and something had made the Andar and his wife to bring him back. Andy stiffened his lip, then before Kieri could head to the door he asked, “Did you cry when I was shot?”

Hope you enjoyed that.  If you’d like to see more, head over to the WIPpet linky and visit some our other awesome members.  Emily Wrayburn, our gracious host, helps keep us in line (usually), and it’s thanks to her that we’re here.