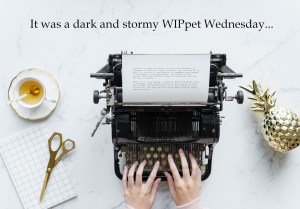 Welcome to another installment of WIPpet Wednesday. This little bloghop started a by KL Schwengel a few years back. Here we share a small snippet of a WIP or Work in Progress for your pleasure. The number of words, sentences or paragraphs depends on the date… abstractly. We choose the amount we share based on what we called WIPpet Maths. Usually there is even some mathematical calculation involved. 🙂

But before I step into that, let me share a bit of my ROW80 progress:

The rest of this month I need to focus more on house stuff—packing especially!—but just getting rid of things we won’t ever use too.  I can guarantee my writing  counts will be down, and I’m (mostly) O.K. with that.

I’m not using maths today for my WIPpet. Because it’s just before Valentine’s Day, just before that day commercial/public declarations of love, here’s a scene from March/Promenade (where I’m still trying to bring all my MCs together in one place) in a prelude to love. Perhaps… Or, it could be a I chose six rather long sentences (or three paragraphs) because the maths worked (2+1+3=6, 2+1=3 or 3). 😀

In this scene, ‘Listii has arrived to meet with Alanii in the summer barracks of the Royal Guard just before the men must head to the city outskirts and greet the returning troops coming in from the battlefields.

‘Listii watched as Alanii slowly eased himself out from behind the small desk, barely disturbing the rolled ciphers that he’d been engrossed in reviewing only moments ago. ‘Listii couldn’t help but note the man’s fluid stride, the effortlessness to his movement. A mixture of observations, his own and all those ‘Listii had experienced second-hand, filled him. Ideas of beauty, images from men and women both as to what was desirable, what defined want…

Driven as he’d been by this strange Call, divinely inspired or not the opinions he’d experienced could not say for certain, ‘Listii felt a certain amount of satisfaction that if he had to be forever forsworn to a man from now on in place of the ‘tianei he’d shared with Atara, that at least Alanii was nearly as beautiful as she’d been.

From what little he’d gathered about the Heir’s feelings on the matter, Alanii wasn’t going to resent him for what Fate had forced them to be to each other, that there was even some admiration perhaps in the Heir’s eyes for what ‘Listii might be able to offer in such a relationship, that perhaps the Heir saw something beautiful in him as well….

If you enjoyed that, there’s more to be found.  Head on over to the WIPpet linky to visit some our other awesome members.  These days, WIPpet Wednesdays are hosted by Emily Wrayburn at Letting the Voices Out.

10 responses to “Ideas of Beauty”