After an insanely busy week, this evening, instead of going to my weekly writer’s group for some wordsprints and socializing, the Hubby and the Boodle and I headed over to Scotia to see a concert.  One of the Hubby’s friends was performing.

The Hubby took this shot with his Note5 (I tried with my iPhone4, but… no.)

Toward the end of the show we had a lovely evening and a pretty sunset.  I wish the phone pictures did it justice: 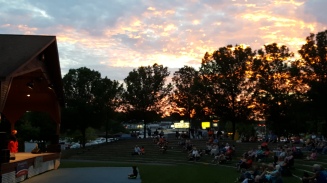 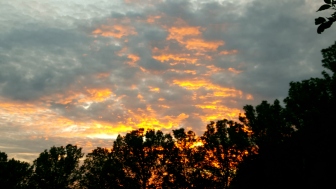 This week could have gone better.  It could have gone worse as well.  Not really complaining, just tired.   And Thursday?  I could have done without the nine-hour wait for car repairs with a bored ten year-old.  We broke the time up some, walking (in the icky, nasty heat along Central Ave in Schenectady) to go to the nearest McDonald’s… also the nearest spot to eat, though just a bit further was a Panera, and had I known how long the wait would be better food would have been chosen.  And we did play some Pokémon Go, but really…  the day was a bit pile of stress, phone tag with a phone that had no volume controls anymore, and a huge repair bill for what should have been an oil change and a safety recall.

If anyone asks about my feelings on our car….

Other than that, no real complaints.  I need a bit more sleep, so… off to do that next.  Looking forward to another busy on next week as the Hubby finishes his transition to his new job.

After the concert was over and we’d begun to head off in search of Pokémon, we saw  fireworks on the other side of the road near the Glen Sanders Mansion.  I only had my (overheating) iPhone 4 with me, so I didn’t get many great shots.  But this one came out wonderfully IMHO:

A Spark of Activity

Starting a new ROWnd always feels a bit… odd for me. Creating ‘rules of engagement’, even with Life itself, doesn’t mesh with the image I have of myself (flawed as it might be).

Good thing there is flexibility built in the ROW80 from beginning to end. I’m going to be changing things all over the map this month. I just feel it. My head is churning with ideas and possibilities all half-formed. I want to jot a few more ideas down and discover where they lead soon. Somewhere not so safe, I suspect, but definitely someplace that will allow me a chance for growth and discovery.

A Round of Words in 80 Days, as the ROW80 is formally called, usually starts on a Monday with a post about one’s goals for the round and follows on Wednesday with a check-in. This post is both. It’s a bad habit I fell into early on in my ROW80 career. I don’t see myself breaking it anytime soon.

Lastly, because this round officially started on the 4th of July, which is our Independence Day in the US, I thought it only fair to share some fireworks with you all. These were actually taken on Saturday in the town of Waterford after their Steamboat Festival. We didn’t do our usual annual Windham Mountain excursion this year. A good thing too, as someone knocked down a telephone pole and we were still home and able to protect our computers by shutting them down properly (UPSs are wonderful things!). Then, we enjoyed a nighttime dip in the pool while the sky lit with fireworks from a few towns away.

Fireworks over the Erie Canal in Waterford, NY: letting my old camera do things on its own in auto mode 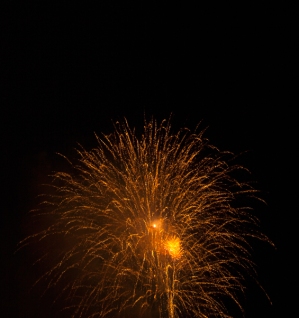 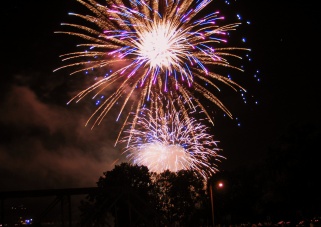