Warning: this post is LONG!  If you don’t want to read it all, link directly to certain sections here: Ready Set Write, ROW80 overall (triggers!) and ROW80 goals concise.

Second warning: this post may include triggers for people who’ve dealt with suicide and mental illness.

May you live in interesting times….

I must say “No, but thank you” to whomever offered me this equivocal blessing.  My characters’ lives are interesting enough for me.  I don’t feel any need to change things up now.

Well, I do…  just in what Douglas Adams called “rigorously defined areas of doubt and uncertainty”.  I’m adding another writing challenge to my summer  excitement, the Ready. Set. Write!, a summer writing intensive that melds the goal setting and cheering of the ROW80 with a bit more of a “get a project done” push of writing challenges such as the many Fast Draft options out there.

The Ready. Set. Write is about goal setting and writing that story in your head that needs to find its way to the page.  It feels a lot like the ROW80 in that sense, just geared more toward weekly goal setting, and much briefer, once-weekly check-ins.  The basic rules are (mostly copied from RSW co-founder, Allison Miller’s blog):

At the start of each week, we’ll update our progress and set new goals using these headings in a check-in post:

We will keep our check-ins short (no more than a sentence or two per heading), and add our post to the group linky.

In that spirit, here is an overview of my RSW Work In Progress and a checklist of my goals for next week:

Getting my present WIP, Courting the Swan’s Song finished, and to beta readers would just make my summer.  A coming-of-age fantasy, CTSS is part of a larger series of books that I’ve been working on, where three people save their world through destroying it, by contacting an ancient enemy and by finding new homes in the stars.  Book 1, CTSS, deals with one of these three people: Alanii Vestimiir.

So my goals for this week are:

Simple enough in theory.  The first one has stumped me for weeks.  I don’t like writing transitions, scenes where even the characters seem to be trying to find ways to keep from being bored.  I know intellectually that these are great moments for character development and world-building, but knowing something and believing it are two different things.  So a challenge to be sure.

I have more goals than these as I also participate in the Round of Words in 80 Days (ROW80) challenge.  For the rest of my goals without a lot of reading, go to my concise ROW80 goals checklist…

The ROW80 touts itself as the Writing Challenge That Knows You Have a Life, and…  it was so nice to have Life happen and not feel like I was failing on all fronts.  It’s amazing what a little nice word in my pending comments was able to do when things fell apart around me on Friday.

I tossed around the idea of talking about what happened here (or anywhere beyond family and a few trusted friends).  It’s one of those things people wouldn’t have talked about when I was a kid.  Thing is…  I believe a lot of things these days are getting better because we talk about them more despite their disturbing nature: things like depression, domestic violence, child abuse, etc….

What happened was my son, the Boodle, helped himself to half a new bottle of acetaminophen (the cherry-flavored kids’ version that looks and tastes like candy), and while we were in the Emergency Room Friday morning, told the ER doctor that he wanted to die and was going to kill himself. 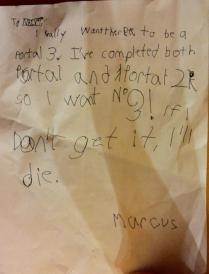 Now, this isn’t the first time the Boodle has used this dramatic catch-phrase.  He’s written letters to Valve Software saying he would die if they didn’t create a Portal 3 game.  He’s made similar claims about  various books and movies he wants to see.  When he made a major faux-pas in one of his homeschooling groups and almost lost his friends, he claimed he wanted to die and not talk about what had happened (he was happy to find out that talking fixed the problem though).

So we’ve heard this phrase more than I care to admit lately.  The tone, the gestures, the situation..  none suggested actual danger given his past use of “I’ll die if” instead of something similar such as “I want to crawl under a rock”.

But I’m not a doctor in an Emergency Room dealing with a child that has overdosed on pain relievers.  The doctor, and then afterwards the social worker and the nurse,  and then the experts we had to see at the crisis ward of the local psychiatric center…  everyone acted as they had to, and we spent a very, very long day wondering if our son had done damage to his liver, having our daily life analyzed, and just wondering if we’d be able to go home as a family for the next week as inpatient care was discussed and insurance forms were filled out and bed counts were made…

I am worn out emotionally, still.  Both my husband and I are trying to figure out what we need to do next first.  Counseling is required (there’s a three-month waiting list at every place I called this morning unless there is a crisis, in which case… why did they send us home); changes all around…

…because we have to take such claims seriously (I first attempted suicide when I was eight… I survived, but some kids don’t), because there is a history of depression and suicide in my family, because the Boodle doesn’t always have a clear grasp of his actions and their consequences and will do things that can harm him without a second thought.

To the Boodle, that tween lament was no big deal, merely an expression of embarrassment and dismay when he had to explain why he didn’t go downstairs for supper (he told me later it was because he didn’t want to stop playing K’Nex and “Littlest Pet Shop in Minecraft in Real Life” to eat or do homework) and instead decided to get into a brand-new, (so-called) safety-sealed bottle of candy-flavored pills.

But big deals are made of small deals….

And with that, I think I should get to my ROW80 check-in.  And about my goals?  I did what I could:

It’s been one helluva couple of days…  but we’re here.  All of us are safe, ….and we’re moving on.