Okay, so I’m a little proud of myself…

I’ve been taking a class via FutureLearn on the Archaeology of Portus (a major (man-made!) port on the west coast of Italy during the 1st-6th centuries AD).  Yesterday, one of the lessons suggested we try to translate a Roman inscription from the Trajanic Period of the port.

Most experts fill in the blanks this way:

This was my translation:

The Divine Emperor Ceasar,
sinew of Nerva (adopted Trajan)
“Trajan’s full name” (lazy; didn’t write it out)
tribune of Dacic (Dacia?)
Consul General, Father of his Country
Made the river/canal to be restored
when the inundation (flooding?) of the Tiber
constantly denied the city its regular flow of trade

This was our teacher’s translation.  Not exactly the same…  but I think I was getting the idea through:

Imperator Caesar Nerva Traianus Augustus, son of the deified Nerva, Conquer of Germany and Dacia, Tribune, Consul, Father of the Nation made a canal by which the floods of the Tiber which continually troubled the City were kept away

Of course, the rest of my personal progress is a bit less inspiring.  Of my ROW80 goals, I’ve done very little.  I’m even falling behind again on my critique group work.  As much as I love FutureLearn, I’ve found I cannot take one of their classes without exploring the topics deeply, spending several more hours a week on each class than the anticipated timeframe.

I did get a small bit of writing done in the UnNamed Story.  This means I have something to post for  WIPpet Wednesday!

Following right on the heels of last week’s piece, here are eight sentences for the 8th of February

Ytramli shook his head, just barely avoiding, it seemed, to snarl at the implication that a priestess was somehow of a lesser calling than a priest, though among most Acarians it was the standard view. He shook his head. “It will hurt her—actually it will destroy her among our own people. To offer herself in this manner for Val’s defense is tantamount to offering herself as chattel. Slaves have been, and are sometimes, still used by some of the temples for ritual supplications when the priestess is too old for the physical acts or—.” The man stopped short and shrugged. “It doesn’t matter why they are used. The point is that doing this will destroy her among the Clans.”

Amused? Bemused? Want more? Head over to the WIPpet linky and visit some our other awesome members. Merci, merci, Emily Witt, for graciously hosting the WIPpet.

Thank you to the ROW80 community for just being there. 🙂

This is a Test

I am writing this post via my new (to me) phone… More of an experiment than I’d hoped for to be honest. Never thought the very setup of the browser and editor would be so different.

One could also call this an experiemt in sanity… I had been promising the Boodle a trip to Dave & Buster’s for a while now (mostly delaying out of a desire to hear), but… I figured I had procrastinated long enough. We’re here, and he’s off galavanting among the blips, bleeps, whistles, bells, squeals and other assundry cacophony that makes up this place.

To add to the “test” quality of this post… It is all being written with my S-pen (the handwriting recognition app and pen that the Galaxy Notes are known for…) Very different from what I expected because of the way the way it interacts with the browser. Also very cool. I just wrote that last sentence with the S-pen and my left hand. The S-pen recognizes my messy off-hand writing nearly better than my normal neat regular writing.

The discoveries that come from Buffalo wing sauce…

Normally since this is Wednesday, I would be posting my ROW80 check-in and my WIPpet post. And… so I will be (if I can figure out how to copy and paste AND perform all my usual color and text tricks here in this browser). Another test! Can I peek at my Dropbox files via the installed version of Word on this phone and decipher what ones of the Scrivener sub-files relates to what section of a particular story (and make it relate to the date).

So here it is…

I spent most of my writing (and thinking) time this past week on Swan Song: Marche/Promenade so this snippet comes from there. We have eight sentences from the 31st sub-file in that Scrivener project.

After breakfast, grain meal of some sort… Visse wasn’t sure what her brother had added beyond a few sweet grains he called ‘ground nuts’ to their own supplies, but it wasn’t like the stuff she had made before, being both sweeter and blander than she had expected.

She imagined he’d probably used some of those twigs—sweetroots he called them, motioning to the edge of their campsite where the ground had been disturbed. A small clutch of plants with with fading yellow-white flowers stood there. By the torn ground lay the trimmed top of a plant or two, clearly the remnants from what her brother had harvested.

A common roadside weed… Her brother was a madman. How did he know his random gleanings wouldn’t get them killed?

If you enjoyed that, perhaps you might wish to head over to the WIPpet linky and visit some our other awesome members. Hopefully if you go there you’ll find many more tales to delight you.

Thank you, Emily Witt, for being our gracious hostess this year!

Another mini… I am still in post-camping recovery. Whatever made me think that I would get ANY writing done while we camped? Though being completely off the Grid for a time did have its niceties, it was hard to get into any of my Works In Progress. When I needed to check something in a previously written file, I couldn’t. And… so instead, I spent the whole of last week daydreaming, note-jotting, picture-taking, and reading (when not doing Family stuff). Well, not totally… I wrote new story on Wednesday. About a page…

It was decompression time more than anything else.

I took some wonderful photos though! When I’m home and using a better internet connection (and can edit the photos to a smaller size), I will post some.

And there it is… I think the test was a success in general.

So, I finally cleared a thing off my (unofficial) To Do List.  A while back I made a deal with fellow ROWer Caren Rich that if I would watch some James Bond movies she would watch some Doctor Who.  Two big “names” in the entertainment industry with very different crowds….

It’s all about the PPK

We had reasonably good time each with the first showings.  I asked Caren to watch the 10th Doctor episode Blink; she had me watch the Pierce Brosnan “Bond finale” Die Another Day.  With both of us having fun with this “new to us” experience we were both up to try another round.

I chose Dr. No, the very first in the Bond dynasty, as my next ‘to see” and suggested a two-for of two of the more popular episodes from the 9th Doctor’s tenure (since Christopher Eccleston basically helped reboot the series with shows like these): The Empty Child and The Doctor Dances.

Mea Culpa!  I had no idea that Caren didn’t like gas masks, and they are EVERYWHERE in this World War II era two-parter.  She hated it, vigorously.

Me?  I just watched Dr. No today as my part in this little trade.  Can’t say I hated it.  Can’t say I loved it.  It was better than I expected (considering how dated the effects are), and now I can see why so many women went gaga over Sean Connery back then (though..  no, sorry).  A good basic action flick…  nothing special in any way and so very, very “white-washed”, imho. I could watch another 007 and probably enjoy myself, but I feel no need to see out any of them given how many other wonderful shows are out there.

Though, I would LOVE to have Dr. No’s underground hide-a-way. 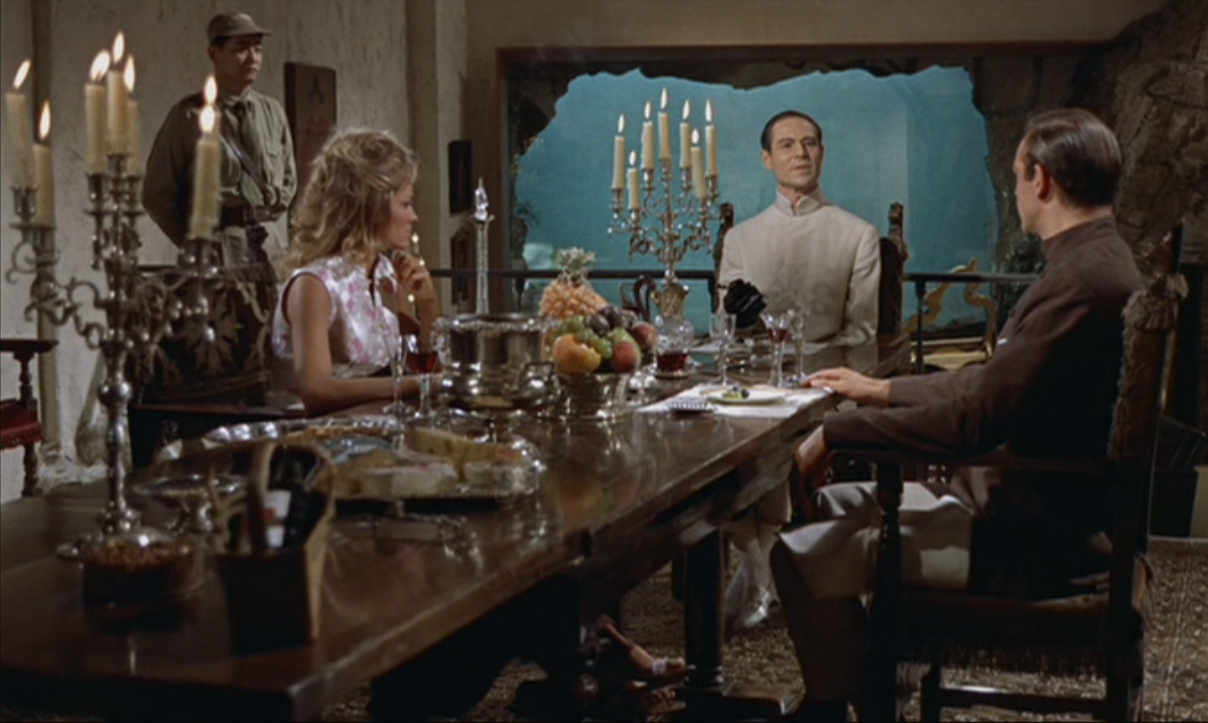 I wish it was a shot of the whole place, not just the dinner table

That’s all.  That’s plenty.  And…  because this is a lovely photo of my favorite breed of dog, here: Enjoy!

Our Nina had been a copper–miss her still (photo cred: Tapscott94)