Oh, The Things I Could Do!

I missed last Wednesday because…  reasons.  One of those reasons was that I felt I had nothing word saying about my progress.  I keep finding cool distractions and things to explore though, and so, I’m going to add a few today…

As we all know, the internet is not just made up of cats, it’s got a lot of words too.

Like online Magnetic Poetry….  where one can play with a few of their sets free

Classes…  I have three classes going on with FutureLearn at the moment.  No, they aren’t official “classes” where I’ve expended a large amount of money for a potential degree, but they do demand time and brainpower.

Well, I guess, three classes just isn’t enough.  Though, given the present political climate in the US, this seems more like a necessity than any other .  So…  now another class:  Calling Bullshit

Oh, and I have finally been writing again, both in my Unnamed Story and my dedicated WIPs.  I even managed to get some of work out to my critique group this past Wednesday, so I’m finally feeling on track–behind, true, but back on track for my goals of this ROWnd.  And my research level for all of this is incredibly high…  Always doing something it seems, these days.

As much as I can’t wait for this month’s local RWA meeting (The Art And Science Of Writing Deep POV), I’m kind of glad I’m not going this weekend.   I want to work a bit more on CTSS so I’ll be ready, emotionally, if not otherwise, for the workshop.

Which brings me to work and Works In Progress in particular…  leading up to the fact that it is WIPpet Wednesday.  I have something!  (Actually, I have plenty of somethings, but one will do, since today is the 1st of March and we always try to make WIPpets suit the day, but I’m giving y’all three paragraphs for the month. :-D)

This WIPpet is from Courting in the Swan Song Series.  The “he” is Alanii.  And this would actually be about page six in the most recent revision of the book, if it were a paperback on a shelf.

At a loss for a better idea, he pasted on a hopeful smile. “You could always, um, take me on… as a recruit.”

Lanilis Kailiis blinked. “I—could—take you on?” The man shook his head as if trying to clear it. “When your escort is brought in, I’ll be sure to have them bring you direct to your bed, my lord. You must have gathered a chill from waiting in the rain.”

“I—” Alanii forced his gaping jaw closed. He pursed his lips, then, gave in to the urge to kick the small lump of earth under his foot. At last he gave half-shrug. “I’m fine. We had far more rain on the trip from (name of town) to Darshalia.”

That’s all I have for today (at least all I feel like writing about. I have this big mental stew about the whole thing with Berkeley and Milo and the Media, and who said what and did what and thought what… and it just doesn’t need to be here.  Or anywhere, really.  Giving these issues as much air-time as we do seems to make them proliferate like roaches.*

Much love to both my fellow ROWers (at the ROW80 blog) and fellow WIPpeteers (whom Emily Witt helps corral at our linky). Join us…

Oh, and would you please add your bit to my AnswerGarden?
https://answergarden.ch/embed/444282

*for the record, I find Milo self-important, self-glorifying and oh-so-very annoying. He is as much a troll as anything that ever lived under a bridge. But he deserves the same rights we demand for ourselves. That also includes the right to be ignored, to be told “you are an idgit”, what-have-you. It doesn’t mean people can or should hurt others in an attempt to stop him from letting his ignorance/arrogance shine for all the world to see

By Her Majesty’s Decree 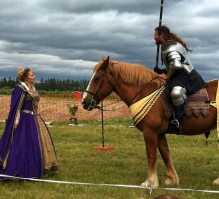 The Queen and the Sheriff of Nottingham (sort of)

Busy day for us here at Chez Mabee, at least for me.  Somehow I got posted to the JuNoWriMo hosting schedule for sprints twice on Sundays (feel free to jump on Twitter and join me if you need some writing boosts–you don’t have to be a June WriMo member to participate), two four hour shifts: from 6-10am and 7-11pm.  We also went to the New York Capital District Renaissance Festival today, which (for anyone who has attended such things) took a lot longer than we expected it would.

It was the Boodle’s first “real” renfaire (there is a little one that occurs every other year at a church in the center of Albany*, but that doesn’t have the space for many of the activities that make up such an event).  For a while we weren’t sure if it wouldn’t be his last.

We shouldn’t have worried.  There was a Shakespeare-inspired skit going on at the Vixens En Garde stage.  After that…  we had no fear of leaving early.  In fact, we stayed well past the ending bell for the Queen’s Blessing and dismissal.  And during the parting wishes, the Boodle was calling out “Huzzah” right along with the crowd.  He wants to go again next year and has asked if we can look into going to one of the other big faires in NYS (Sterling or Sterling Forest) before summer is over. 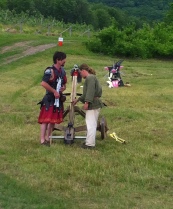 The Boodle wasn’t quite as keen on firing the ballista

A big change from the kid who didn’t know if he was even interested.

He has even expressed something of an interest (though I’m unsure how strong it is) in planning a costume for next year).  If he does, cool.  If not, equally cool.  There is plenty of time to get involved more fully such activities.

And with his love of the Bard, who knows…  maybe someday he will be one of those on the stage someday!

In all, it’s been a good day.  A tiring one…  but worth it.  Even if it did make me dream of England again…

Now, ’tis time for my weekly assessment and…

WriMos are tricky things.  They tend to consume more energy than they feel like they should.

I mean, really, if I normally hit between 750-1000 words a day, and somehow manage to goof off a bunch, then it stands to reason that a bit more than doubling that shouldn’t really be an issue.  On an average day, I can usually pull out 750 words in a half-hour.

I’ve been lucky to achieve 400 +/- these last few days in the same amount of time.  And when I’m hosting sprints, my actual wordcount drops even further.  I am a host after all, and as a host, it is my responsibility to mingle and interact, answer questions, provide  support.  It’s fun, but it’s very disruptive to the muse at times.

How does this work with my goals? 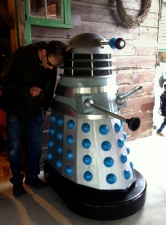 Of course they had Daleks in Medieval times! They followed the Doctor, and he’s been everywhere.

And that’s pretty much it.  I’m overtired; have dealt with two migraines and a slew of sinus headaches this week, two power outages (which almost ruined out file server because it tried to do updates between outages!), “Stuff”, my SiL’s father died suddenly…

I keep saying I’ll add to these goals, but Life doesn’t seem to want to work that way lately.  Maybe it’s just as well that the ROWnd is almost over.   I will be ending things on a “I DID it” note instead of scrambling to reach ever newer and brighter stars.

There is something kind of cool about that too..

Thanks for stopping over!  If you’d like to visit other ROWers and cheer them on, follow this linky here.

* this isn’t the main site, but there is a funny story in this piece, since the cathedral was never completed and a stop-gap roof was installed so the building would be usable

Got Time For a Quickie?

Short one today, all y’all.  The hubby and I have a lunch date with friends, insurance paperwork…yadda yadda. There’s all the time in the world it seems…

…just after everything else is done first.

So here’s it all in a nutshell.

This has been an incredibly crazy, yet oddly productive week.  I’m on track with everything except my new “creativity goal”, but since the Boodle is home from school this week and there’s been a shift of focus there, I’m not too bothered.

What is bothering me is that nagging surety I’ve lost a friend.  Mr. Kitty, the last of our feral cats turned to cuddle-bum and window serenader,  hasn’t come home since Sunday.  Worse yet, since I’d been desperate to sleep in on Sunday for some huggy-dozing time with the Leader of the Opposition Party, it was the Boodle that fed Mr. Kitty, not me—I’m actually not sure he was here on Sunday at all.

All I can do is hope that if he was caught by someone (some group has taken up catching ferals nearby because we had had the male version of the feared cat lady down the road for years, and he finally lost his home and the cats have run rampant).  I really hope Mr. Kitty was trapped by such a group and not taken by coyotes (so far the nearby roads shows no sign of a kitty-corpse).  He’s lovable, affectionate, wants to have a forever home (which is something I could have never given him because of… things).

But this, and so much of this past year when I wasn’t blogging because life was cray-cray, is why I picked the title I did today.  Maybe it wouldn’t have helped if I had gotten up on Sunday—maybe he was gone already—but I wouldn’t have this regret that I ‘wasn’t there’ when I could have been. 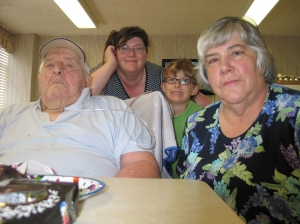 It was the same when my grandfather died in December…  we hadn’t gone to see him because we’d been fighting cold and sickness after cold and sickness, and he had a very compromised immune system.

One of my best friends died in December…  we’d set plans for a lunch date in January ‘after the holiday crazy was done’.  It was a freak thing, but…  now I eat sushi and cry a little (kind of happy tears, because they are great memories, but still). 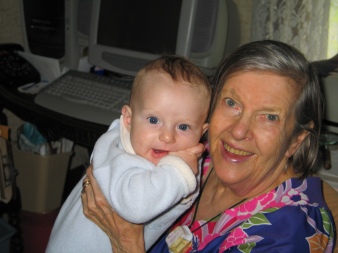 And my grandmother died a few weeks later.  I got to spend some time around Christmas with her, but then Rod’s death and disasters at the Boodle’s school…

It seemed like so much to take a day trip to Syracuse just for an hour or two of visiting.  Maybe next weekend I’d have ‘more time’…

So, yesterday…  when I invited Elizabeth Anne Mitchell to sprint with me and she couldn’t because she had a meeting in ten minutes at work, I decided I was making a change for myself at the very least.  I texted her back “Quick, write two sentences!”

I mean, there’s always time for a Quickie….